The current town hall was built in the XVIth century , but with precedence the Council of the city already was occupying this place, as compared to the Cathedral. In the first place was accomplished a urgency intervention in the years 1569-1571, given its very bad condition, the one which ran under the charge of Miguel Altué. Afterwards, in 1577, was assaulted an almost total reform of the house, entrusted to the same master of work, the one which were obtained the Courtyard and the Meetings Salon that today we can see.
Hardly forty years afterwards, the council decided to build a facade deigns of the internal reforms, as well as to tidy and to give lodging adapted to the jail and to the archive, with what the interior space returned to be redistributed and enlarged. This time, the contract was formalized with Antonio Mendizábal, Hernando Abadía and Juan Martínez.
Thus it remained configured the Consistorial House (Town Hall), of the one which the Courtyard is maybe the stay that with more purity is conserved. In it, it is of emphasizing the wood roof and the staircase, with the series of arches that precedes it. Under these arches were installed the seat in the one which was accomplishing his performances the Justice of the city, and that was moved to the first floor thereinafter. To that end, they can deal between the arches allusive medallions to the correct exercise of the justice. 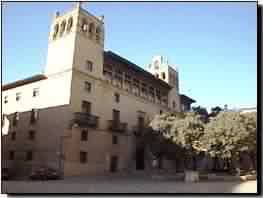 The staircase is a piece carried out by Miguel Urliens, within framework of the reforms directed by Altué. Probably, the date of these accomplishments will be the one which indicates the medallion of the arcade: 1578. In the sculpture work, Urliens populates the spaces with warriors and kings, between those which could be guessed to César, Sertorio, Carlos V and Felipe III with his two women. Afterwards, in baroque era, would be crowned the box with a showy vault with ecchinus with nerves decorated with plaster-works.
This staircase leads to the today call "Salon of the Justice", where it is found the wood seat of the XVI century that originally was in the courtyard, as well as the picture of Casado del Alisal tittled "La Campana de Huesca" ( "The Bell of Huesca" ). As compared to this linen, in other one, of unknown author, it is collected the delivery to the roman general Sertorio, on the part of the goddess Minerva, of the flat of the University of Huesca. The building of the University, of octagonal plant , is at present the headquarters of the Provincial Museum.
Leant to the consistorial house can deal the facade of the Santiago College, built in 1610 for Antonio de Mendizábal. It was established in 1534, and it was the Major College more important of the ancient University of Huesca. In its interior it conserves a chapel with an altarpiece of the apostle Santiago and a monumental shield of the emperor Carlos V.