The last spurs (of considerable height) of the "Aragonesian" Pyrenee to whose feet is extended the Hoya de Huesca, in which is found the capital of the province and the Cinco Villas, are formed by the Pre-Pyrenee Mountains Chain. In these, the rivers have created deep ravines and high walls called in aragonesian language "Mallos", that they are originated by the erosion.
More southward and West, we find ourselves already with the Bardenas, where also the erosion has obtained let in the surface, the hardest materials.
The Somontano (Down-mountain), it is a territory of great cultural wealth, and above all of romanesque art, with countless churches, castles and palaces. Itineraries have been created to know them and furthermore be able to envisage its environments. Some remains exist from the Roman era (thermal baths, aqueducts, mausolea); from the Islam (walls) and an interesting Gothic; and even, Mudejar monuments and a rich very differentiated popular architecture.
This zone of the Pre-Pyrenee has in the "mallos" 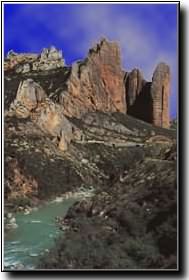 a great attractive; in addition to its surprising aspect, in them are practiced escalade sports, mountain bicycle, ravines and gorges, delta wing or footpath.
However, the lagoons with underground waters and artificial dammings are found in the flatness; some of these resources are used as sports center. On other hand, the Bardenas, they are a good place for excursions in bicycle; it is an inhospitable territory and done not know.
The holidays in the Somontano continue preserving the tradition, giving to its inhabitants a tolerance and living together air, as well as a hospital and open character.

Riglos:: is the capital of the "PeÒas de Riglos" (Rocks of Riglos) and it is located to 678 mts. of height, with a population of some 70 inhabitants. The picturesque urban nucleus emphasizes on the left margin of the G·llego river with the huge Mallos of escort. The access to the people, shows us the monolith in report of two scalers (Rabad and Navarro) that perished in the Alps (1963). There is a small church of the XIth century that was chapel of the Monastery of San MartÌn. The church consists of an alone nave with an apse and vault. It is in the higher part of the town and two romanesques images are venerated: the Virgin of the Mallo and that of Carcavilla. The Mallos are escalated by far mountain-climbers and receive denominations as El Puro (The Pure), El PisÛn (The Rammer), El FÌrer, ... Riglos celebrates holidays 20 of January and 1 of June in honor of the Virgin of the Mallo. This place is very frequented by artists: painters, poets and writers, that a day launched their meaningful `Manifiesto de Riglos" (Manifest of Riglos).