The Carnivals of Huesca

The Carnival, term comes from the carnestolendas term, wanting to mean something so removing the meat, or also of `Carnis avalis' that for corruption of the word, it gave in place of`Carro naval'. The Carnival is a party of Spring, in which is granted great protagonism to the rite of the fecundity. In the antiquity, a mockery of Isis was even strolled on a naval car, next to a masquerade.
The Middle Age will inherit more the rites that the pagan myths and will Christianize all those excesses with the Lent. During the Carnival, 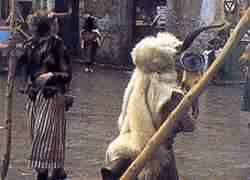 the society will allow to beat and to criticize, smiling unctuously for it, perhaps because it is a fleeting situation; for they are used it the lashers masks, as well as the fools, the zamarrones, the chamarluco, the cipotegato, etc.,...
In Gistaín will highlight the typical `peirote', although the public trials that was underwent the puppet have already disappeared; trial that people of the town take place, adorned with old clothes. This way, it was loaded the "accused" with all the wrongs of the collective, to purge later in the cleanser fire.
In Bielsa, was the bear of the carnivals the expiatory male goat. The Christianity will make that the masks are things of the Devil, but even so, people smudge of black their faces and use`Mascarutas' they utilize cowbells, throwing water and fruits, ridiculing to the bourgeoisies (in Gistaín town) and stageing dances (`Trangas ' of Bielsa that spend three days). After Carnival, they will come: the funeral of the sardine, the Vigil of the Lent.... and the penances.