The valley of Bujaruelo, is constituted for the superior course of the Ara river, since itīs born to the foot of the Puerto de las Mulas (Port of the Mules) and of Cauterets one, until the known PUENTE DE LOS NAVARROS; its delimiting with the nearby Valley of Broto, is the Throat of the Navarros (Garganta de los Navarros) with its narrowness. This zone is the most Pyrenean of the valley of the Ara and still not very known, from the times of Lucas Mallada who was asserting that.. "... this solitary extreme of the Valley of Broto, is of the most restless corners and less known of the Pyrenees ".
nbsp;    The valley is designated like Bujaruelo, by being SAN NICOLÁS DE BUJARUELO, the only one inhabited kernel of all its extension, that belongs totality to the term of Torla. Its form, it is triangular with the vertex in the Peak of Alfonso Meillón (2.887 m.) and the Ara river as bisectrix, and with a tour about 20 Kms.. It is separated of the Valley of Tena, by a spur that joins it to the Mountain Chain of Tendeņera, emphasizing heights (of South to North) such as: the peaks of Tendeņera (2.853), Baldairán (2.702), Brazato (2.760), Batanes (2.905) and Bramatuero (2.906). It is communicated with this valley by the hills of Tendeņera (2.545), Brazato (2.574) and of Letrero (2.637); to the East, it remains the gloomy and high massive of VIGNEMALE and its southern counterfort, the Mountain Chain of Sanderuelo and the Tallón, that separates to the Bujaruelo Valley from its neighboring from Ossouč. To the South close the eastern counterfort of Tendeņera, between those which are projected Peņa Otal or Araņonera (2.705) and Mondarruego that serves as hinge with the neighboring valley of Ordesa. To the valley it is arrived by the same Puente de los Navarros; from there, it starts a track of some 7 Kms. something injured that it leads to San Nicolás de Bujaruelo.
The Ara river, reflects with impetus between the headlands of the Garganta de los Navarros, between a vegetation that mixes beechs, black pine and firs without forgetting large bushes as the box. After have let to the left the Barranco de las Camas, the track crosses to the straight margin of the Ara river, being broadened a little under the Tozal del Cebollar. Below, to the foot of the Barranco de Santa Elena, almost hides by the vegetation, it is the hermitage of that Saint that it is very venerated in all the region. Also very near, it is the Cascada de Santa Elena (Santa Elena Fall) that increases its beauty in the era of the thaw. From here, the riverbed is returned to box in the Garganta de Bujaruelo that flank it the walls of the Gatera, (to the East), and the buttresses of the Peņa de Otal and of theTurbón (to the West). When is gone through the Barranco Turbón, appears a beautiful sight (though something short) of the white summits of the Tendeņera that emerge between the obscure forests.
When therocks of Ciancias are passed, it is opened the Valley unexpectedly being formed a small oval circus that frames a meadow of not large proportions, where is seated the tiny hamlet of San NICOLÁS DE BUJARUELO ("Boucharó" for the Frenchs) to 1.338 m. of height. The name seems that takes issue with the abundance of box in those places. It is composed of an inn - asylum, an attached hut and a little church devoted to San Nicolás. 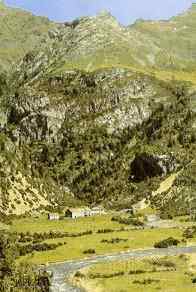