It is a natural space of exceptional characteristics, compound for the massive of "Las Tres Sorores" (The Three Sorores), of those which emphasizes Monte Perdido Lost Mountain with tits 3.355 m. of altitude. They are its other two sisters: the "Cilindro" (Cylinder) (3.328 m) and Soum of Ramond (3.262 m.). The training of this massive, is dues to hertzinianics folds and thereinafter, to the action of the glaciers. In principle, nobody knew to locate it and its knowledge was vagrant, and by this its name. He was Louis Ramond of Carboničres, who promoted the first ascension in 1802, though the Spanish engineer Vicente Heredia in 1791 already put an indicium on The Three Sorores. Also, there are references of the fact that shepherds of Fanlo (Huesca) carried from always the cattle to graze to the flatness of Góriz (during the Summer and by appropriate road); as well as the cure of the Sanctuary of Pineta, that at the beginning of 1800, was carrying to the Lost Mountain summit the scarce visitors that had and in an alone session (departure and return from the hermitage). Investigations in the files of Barbastro, say that the priest was Mosén Vicente Zueras, natural of Bielsa (1761), ordered in 1794 and Preceding of the Sanctuary of Pineta in 1795.
The same year of the conquest of the Mountain, accompanied Ramond of a hunter and of Laurent, he was ventured by the proximities of the La Brecha de Roldán (Gap of Roldán) discovering thus, the Valley of Ordesa, that always it captivated to him. He abandoned his pyrenran life, but he let some stupendous books that they were the better texts of that era ..... and would happen much time until they would be surpassed. Three years after the conquest of Ramond, Carlos de Berenguer and his guide Rondó, (25-26 of August of 1805) , were inaugurating the ascension to Lost Mountain by the expensive South (Gap of Rolando, Majada de Góriz and Las Escalas). In 1841 the engineer Colomés of Julián, classified the glaciers and referred 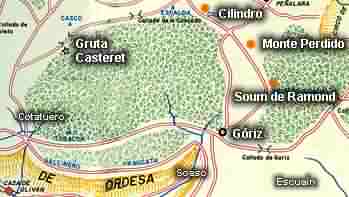 for the first time the contours of the cannon of Ańisclo. 10 of August of 1858, Alfredo Tonnellé made the ascension to Lost Mountain and he came back to Torla by the Valley of Ordesa. It was 1862 when Carlos Packe publishes a guide of these mountains. In 1874, Scharader publishes a map of Lost Mountain that it was complemented by Wallon in 1877. It is this year when the engineer Lucas Mallada writes some Menorias of throbbing interest for geologists. In the year 1888 Cčlestin Passet, Francoise Sales and De Monts, escalate the Lost Mountain by the glacier zone North; then they report, that there was a great spanked of `seracs' and some ice needles that they have disappeared; but the 'seracs' were being collapsed with the years and in 1950, caused an accident upon falling on a group of soldiers, provoking the death of the captain Grávalos and two companions. Today, the expensive North is feasible for an expert mountainner, being it on the other hand unfeasible (by what is dangerous) the wall where before were the 'seracs'.
The second mountain of The Three Sorores, the Cylinder of Marboré, was conquered in 1957 for the aragonesians Bescós and Montaner; and it was for its eastern face, that is plumb-line out. The Peak of Ańisclo, or Soum of Ramond (Soum means summit of great height) is the third of The Sorores and from here, it starts the call "Circo de Pineta" (Walls of Pineta). Once it exceeded the "Rincón de Soaso" (Corner of Soaso), and "to the foot" of the massive of The Three Sorores, in the spot designated Circus of Góriz, they are already very next the Refuges of the Spanish Federation of Mountaineering. One is the Refuge of Góriz to 2.200 ms of height, opened of October to June, with sufficient squares (one must to carry equipment to cook and sleep). the other, it is that of Julián Delgado Ubeda, to 2.230 m. of height, of some 80 squares, running water and restaurant. The keys, they can be requested the Federation Aragonesa of Mountaineering of Zaragoza. The access to these housings, is accomplished for road, through Circus of Soaso; from here, they can be made excursions to surroundings.