Villa of the province of Huesca, located between Esera and Cinca rivers. Inhabitants: about 340. Altitude: 649 meters on the level of the sea. It is far of Huesca 88 kilometers. Gentile: "pueblano". The routes of the Ribagorza are grandiose; they escape to the cold enumeration of a tourist guide to the use; not even they are to condense them in a trips book. What it imports is to live the landscape and to confer with the men that still are sat owners of it. To one configures to himself the environment in which lives and he is unfolded, it remained no doubt, and the ambient, by these places, it is stout and sublime, sweetly restless, where the green is conjugated with the clear blue of the sky, for which the clouds is displace impulse of the moderate wind.
Fifty kilometers from Huesca to Barbastro. Once in the city of the Vero, the traveler is going to encounter of the Cinca river , that reflect quiet by the width of the valley, once already diminished its waters, contained its impulses by the dam of El Grado. It is reached the left margin about ten kilometers from Barbastro, to the height of El Chopo - typical lunchroom long ago, for the one which then blew also modernist air -; the place is particularly pleasing during the summer era. The waters of the Cinca river, made backwaters on the bridges, attractiat front, the houses of Estada are shown to the landscape, between the crags. Some kilometers most and it is let the margin of the Cinca river to make for Esera one, with rocky escort, gigantic of stone that give life to the strait of Olvena. Between tunnels perforated in the own rock, and the quaint filling what is all, one reaches the opened landscape again to the transpose the last tunnel, where the grandeur of the valley is reflected in the quiet waters of the damming of Barasona (reservoir that has the name of Joaquín Costa), able place for practice of the nautical sports and for the fishing. At the bottom same of the reservoir, but being perched in the mountain, it has been born a beautiful urbanization, already in municipal term of La Puebla de Castro. Some two kilometers before to arrive to Graus the highway that leads to El Grado and Torreciudad is born. It is also the one which carries to La Puebla, distant nine kilometers of Graus, thirty and eight from Barbastro, eighty and eight from Huesca and hundred fifty and eight from Zaragoza.
It exist other route, also very suggestive, continuing for the highway of Benasque until El Grado.
It is earned height between curves, until discovering the town of La Puebla de Castro on a soft hill. It is acceded almost directly to the Mayor square, where the church is, and where emphasizes a Gothic building, of ends of the century XVII and principles of the XVIII; it has quadrilateral form, of four bodies, to base of stone, and chapitel of brick as top. The principal facade has suffered some modifications, with a little roof addition and heavy plasterings; it remains safe however, the gratuitous series of arches under the roof, of Renaissance style .
The square is rectangular, wide, stage of holidays and witness of all the local events. From there same starts a street with porchs, and other, in rising sense, that carries to the porch of Arriba (Up), with its beautiful stone arch, restored, that is opened to the Plaza de la Cruz, called thus by the cross that in time occupied the center of the same. 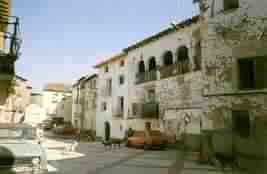 In this zone is where the modern town is there has grown more. There is other porch, that of Abajo (Down), to which is arrived by the Graus street.
It remains several noble buildings, with its armourer stones in the facades. In the interior of some of they, like it happens with Romeu house , they can be admired mural paintings, that well they could be accomplished between the centuries XVI and XVIII.
It Counts also, the houses of Juan Antonio, Andrés and Jorge Ceda. Anciently they had two inns, that of Abajo (Down) and that of Juan el de la Venta, where Braulio Foz located one of the passages of «Pedro Saputo» (in his book "Vida de Pedro Saputo"). ++« ... Inclined his address to the East,upward to rise to the Ribagorza, and arrived to La Puebla de Castro, where he stopped in the inn, no carrying record of that people. Talkative the innkeeper was, happy, exempt and very attentive. To the desserts requested license and entered the quarter of Pedro Saputo, and said that if was wanting to awake a little, he could serve to him, because was thinking to go to the fair of Graus to be amused a while, and in low voice added: And to we bring a maid for keys landlady, because she´s going to marry that I have, and the cook does not is worth but for the stews and firebrands».
In La Puebla de Castro they recall still the inn of Juan de la Venta, in which was made "the wedding adjustments", and there was project matrimonial that it was not prospering due to two fanegas (grain mesure, abaout 1.60 bu.) of wheat, already they would be of more or of less.
La Puebla was born as a village of Castro and took the surname of its root to fuse in an only name, and to born to the life as municipality: thus it emerged La Puebla de Castro. There is no doubt on its origin. In the peak where was lifted the castle of Castro, mastering the defile of Olvena, there is now the hermitage devoted to San Román. There it was seated, in the century XI, an important defensive complex, the most strategic maybe, in the confluence of the Esera and Cinca rivers. There the vestiges of the past remain . Also, in the hill of the Calvario, there is an interesting archaeologic deposit, where they have been found remains of Labitolosa, Roman population.
The altarpiece of the greater altar of the hermitage of San Román de Castro is conserved currently in the parishes church of La Puebla; it is principle of the century XVI - what is same that the chasubles that there are kept -, and represents several scenes of the life of San Benito. Also they proceed of Castro two valuable tables, that some fix in the century XI and other at the beginning of the XIV; represent to the apostles Pedro and Pablo.
In La Puebla seated their houses and estates the last inhabitants of Castro; from there that the most notable buildings of the locality they proceed of the centuries XVII and XVIII. It was sir of the place Guillén de Moncada, in the century XIl, until sir Jaime I incorporated the territory into the Crown of Aragón and created the barony of Castro, with granting of the same to his bastard son , Fernán Sánchez. La puebla de Castro does not count beyond three hundred inhabitants, though arrived to add near thousand. It celebrates the greater holidays 16 of August, in honor of San Roque. - Then there are those of Castro, in honor of San Román, 28 of November.
The day of Castro - the second Easter Sunday, (that of Grenada) - they go in pilgrimage to the hermitage, that is far some three kilometers of the current town. Before were celebrated the mass and had lunch, to return to eat each one to his house; now it is celebrated in Castro the food, headed for the municipal authorities.
La Puebla counts on other two hermitages: that of standard, San Roque, and that of Santa María, known this last as of the Virgen of Fuera. The holidays of Santa Águeda, 5 of February, have special resonance in all the region, because the women of La Puebla de Castro master fully on the men. It has been traditional the planted of the pine for the greater holidays, all polished in the middle of the square, with two roosters crowning it, those which there was that to reach climbing by the slippery trunk, And it is continued doing the Holy Friday procession, in the one which solely leave "living «pasos»", (Christ passion figures) according to the secular tradition.
The soft hill Gordo (Fat), the mountains of San Roque el Viejo y de Castro, and the mountains chains of Castilla, put fence to the landscape, where the vegetation abounds.