Calvera (in the Isßbena Valley)

This Municipality belonging to Veracruz (in Huesca-Spain-), has something more than a score of inhabitants living to 1.207 m. of height and to 92 Km. of Huesca. Their gentile is: calverano.
Part of the place are the villages of HerrerĒas and La Cuadreta. Of the first part the hint for Calvera. The village is located to the exit of the narrow pass of La Croqueta (to the South), 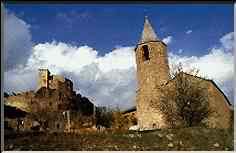 climbed on a sheer hill that crowns a castle. The "capital" is Beranuy and the Monastery of Santa MarĒa of Obarra, the villages of Castrocid and Morens are in its municipal term.
Of the castle that was inhabited until it doesn't make a lot (it dates of the XIth century), it alone is the body of the building and a rectangular tower. The parochial church is dedicated to San Andrķs and it is work carried out in the XI century, reformed the XII one and the XVI one; of this last century they are the four sizes of the biggest altarpiece destroyed in the Spanish Civil War of 1936. The Gothic is more predominant than romanesque style.
There is it varies hermitages: that of San Pablo (centuries XI-XII); San Valero (century XI) and Santa MarĒa (Lombard, century. XII). There are remains of a monastery of the XIIth and XVIth centuries, and at half hour of the town it is the Cuadra de Calvera with a similar church to that of Obarra and with a Virgin's carving. The Basilic of the monastery of Santa MarĒa de Obarra consists of three naves (century XI), Visigothic antecedents, exterior Lombard-Catalan, three apses, and tower of square plant.