Although of French origin, Lucien has much of 'oscense' (so born in Huesca); not in vain his works and his contact with 'Upper-Aragon' earth therefore credit it.
He is a pleasant writer and great walker (hiker) by the Aragonese Pyrenean, of whom he was an extraordinary publishing of its beauties. Very specially they were it those of Ordesa, valley that he knew in 1891. 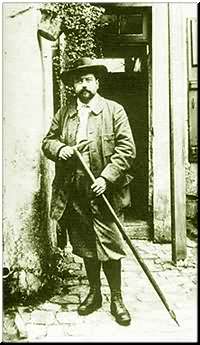 Briet dedicated many of his writings to these subjects, that were gathered in three books by the Museum of the Pyrenees of Lourdes. Therefore, his works are remarkable on the Macizo de Marboré, Peña Montañesa. Sierra de Guara, desfiladero de Entremón, Gargantas del rio Vero, Valle de Vió, rio Flumen, El Salto de Roldán, Bielsa, diverse precipices and caves… and specially his book 'Beauties Upper-Aragón' ( Bellezas del Alto Aragón), that was published in Huesca in 1913, and of which several editings became, being first in 1977. In this book he describes his adventures by Ordesa, valley of the Ara river, Escuaín, Bielsa, Mascún, and he even mentions the Pyrenean spelunking scope of the limestone one. His work is dedicated to Huesca ' by the love to its caverns, precipices and mountains'.
His attention to the Upper-Aragón and specially to the Macizo de Marboré, registers within a tradition of the French studies of the Pyrenean, of cartographic, scientific, montaineers and pre-tourist explorations, that goes from Ramond to Schrader. His work must of being added to the one of other authors, whose joint work supposes a most important contribution to the precise knowledge of the mountainous chain.
At its moment, the work of Briet had a great publishing effectiveness and of course, contributed to that conscience was taken to protect the nature in Ordesa, since promoted the idea of the creation of the present National Park.
His writings more were known in Aragón than those other companions and compatriots of him, that occasionally dealt our mountains with more rigor. Still today, the work of Briet constitutes a most valuable testimony of the Pyrenee landscapes at the moments at which his author crossed them.
Almost 90 years later, when its work is read, surprise so much the accurate one and detailed description of the places that it relates, as the graphical support of multitude of photographies of an excellent quality, considering which they are from principle of the last century. The contemplation of these last ones, for the connoisseur of the places, with enough frequency, transmits an pleasant feeling of nostalgia.... .